Tales of Faith 3-Month Blog Tour || All in the Name

Hello Friends!
Today I have the honor of hosting author Amanda Tero as part of a 3-month blog tour for her series, Tales of Faith. I have read the first two books of the series and am in the process of beta reading the exciting last book of the series, Protecting the Poor. I'm really excited to share it's release with y'all in August! Anyway, today Amanda will be discussing how she chooses names for her memorable characters. Please welcome Amanda Tero!

One of the biggest parts in writing any book is finding the right names. The right names for the characters, for the book itself, and for the series. Sometimes, I have a really easy time finding names. Other times… well, we end up with a main character named Dumphey.
Belle was easy. I mean, Belle is Belle. A classic retelling. She didn’t need a change. The title also came pretty quickly: “Befriending the Beast.” I knew I wanted something to do with the beast in the title, and I liked the hint of alliteration. 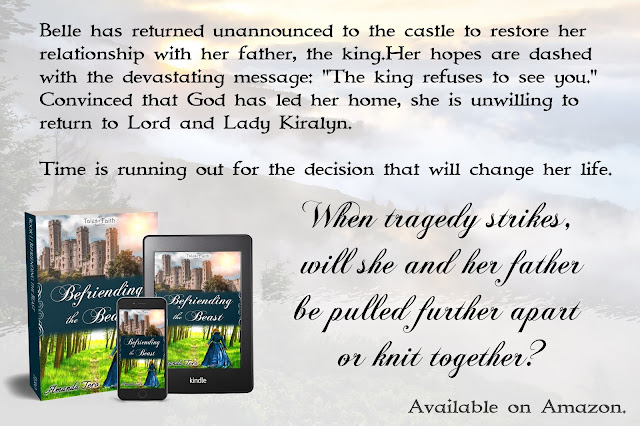 When it came to Cinderella in “The Secret Slipper,” I had the title first—then I had to find a story to go with it. I’ve seen so many retellings where Cinderella is simply Ella, so I wanted to do something a little differently. Plus, I needed her name to have been altered—so Ellia and Lia it was. I think my sister actually came up with that one. As for Raoul… I named him in “Befriending the Beast.” I didn’t even know how to pronounce the poor guy’s name. He was just a side character. Until I decided to give him his own story in book two. Yes, writers, be cautious in naming your characters—they may come back to haunt you as MCs. 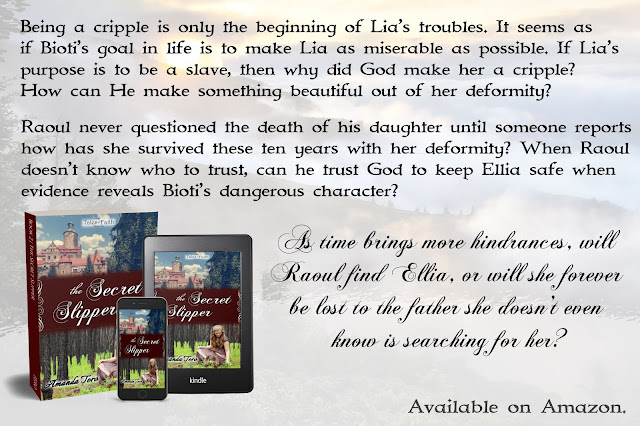 And then Dumphey. Poor Dumphey. He was in the exact same predicament as Raoul. But I do find his story interesting. When I chose his name, I purposefully went for a name that you read with your eyebrows raised. I wanted to prove that it’s a personality—not a name—that makes a character. It just happened that he got a whole book in which to convince his readers to think about his character. Had I known he would be a Robin Hood MC, I may have done a playoff of Robin or Locksley. Here you see how poorly I planned out this series (it has definitely taught me a lot for future writing!). And the title, “Protecting the Poor,” I already had BB and SS, so I just needed a P-word to couple with “Poor.” And then write the story to convince the readers that the title fit. ;) 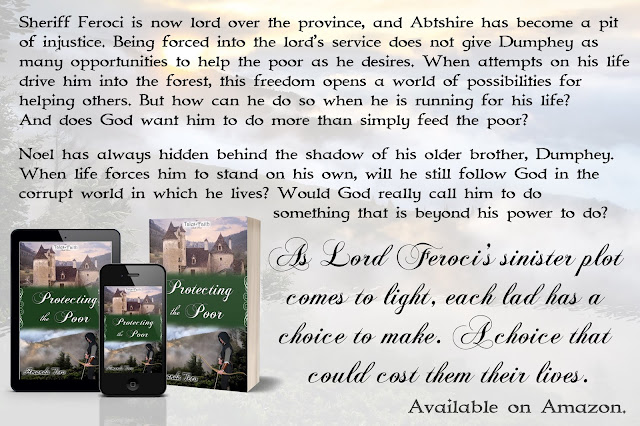 Beyond naming the MCs in the “Tales of Faith” series, there were all the side characters. Since this was more fantasy than historical, I referenced a website with such names. Some names got changed multiple times throughout the edits or morphed into one character. I did a whole video on me and my names for “The Secret Slipper” (it was the one book that had the most in depth name changes): https://youtu.be/r1lVaayybiE
Lastly, “Tales of Faith.” The series title. Okay, I have a confession to make: one of my least favorite things to do is title my book. I just have a hard time with it (you’ll probably never see me titling chapters!!!). So while the titles of the series flowed fairly well, as soon as I knew that “Befriending the Beast” was going to be part of a series, I now had another title to work on. My friend A.M. Heath helped brainstorm with this and we texted back and forth over the course of a few days. My very first suggestions were, “Recaptured Tales” or “Tales Recaptured.” But I also had a list of words I just liked: truth, tale, old, cord, faith, ages. In the mix, we considered “Timeless Tales of Truth” (too long for me), “Faith of the Ages,” “Old Tales of Truth,” and “Timeless Faith.” I seriously considered keeping alliteration for the series title and doing “Tales of Truth,” but it didn’t quite seem to fit. As you notice, we kept beating around the title that I now have: “Tales of Faith.” I think my final decision came when I designed a logo for the series and slapped it on the cover. It just fit. 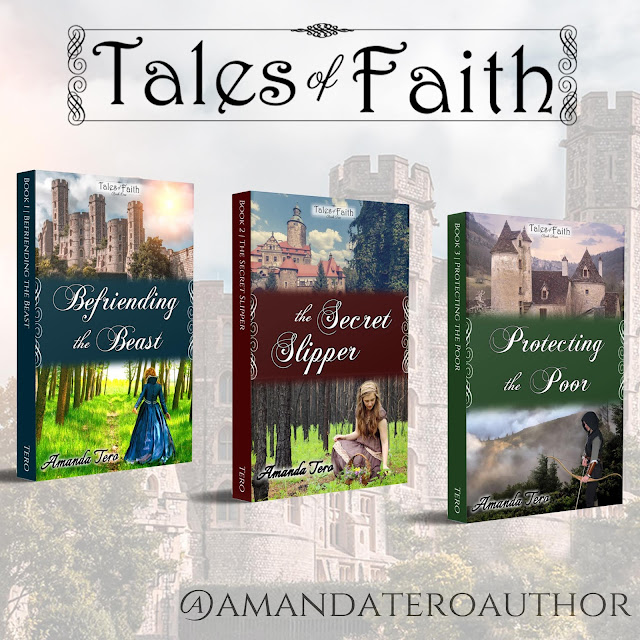 So there you have it—a glimpse of how I name and title things. Very sporadic, yes. But my top recommendations for coming up with good names and titles are:
What are your top tips for nailing down some names and titles?

About the Tour
In anticipation of the release of “Protecting the Poor” (book three in the Tales of Faith series), Amanda is guest posting or being featured on over a dozen blogs each month. Each post is unique to the blog—an inspirational post, an article on the writing craft, an excerpt from one of the Tales of Faith books… you’ll just have to visit each blog to see what comes up. ;) Amanda will link to each blog on With a Joyful Noise, so check in every week and see what blogs have a special Tales of Faith feature!
About Amanda
Amanda Tero began her love for words at a young age—reading anything she could get her hands on and penning short stories as young as age eight. Since graduation, she has honed her writing skills by dedicated practice and study of the writing craft. She began her journey of publication with a few short stories that she had written for her sisters and continued to add to her collection with other short stories, novellas, and novels. It is her utmost desire to write that which not only pleases her Lord and Savior, but also draws the reader into a deeper relationship with Jesus Christ.
Connect with Amanda
Email: amandaterobooks@gmail.com
Website: http://amandatero.com/
Facebook: https://www.facebook.com/amandateroauthor/
Instagram: https://www.instagram.com/amandateroauthor/
Pinterest: https://www.pinterest.com/amandaruthtero/
Blog: www.withajoyfulnoise.blogspot.com
Goodreads: https://www.goodreads.com/AmandaTero
Amazon: http://www.amazon.com/author/amandatero
And there you have it folks! I hope you have enjoyed the first of three Tales of Faith blog tour posts that will be featured here on my blog. Come back next month for a second post and don't forget to follow the rest of the tour on Amanda's blog!
Until next time.... 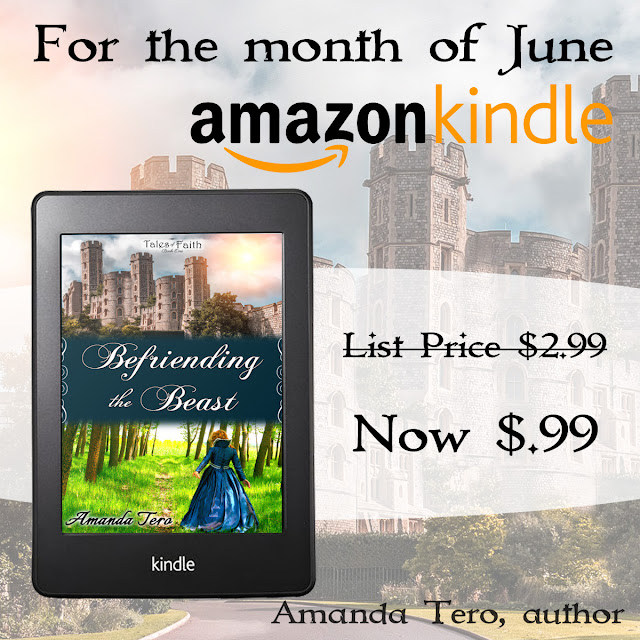 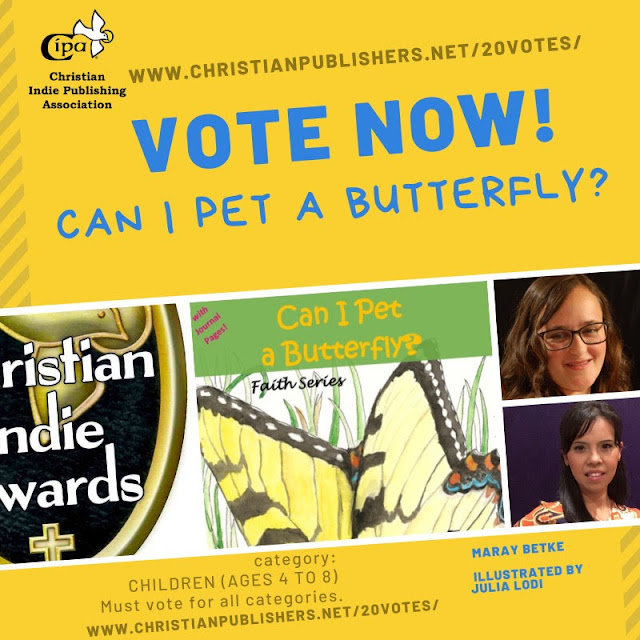